skip to main | skip to sidebar

Vegan in Vegas: The Vitamix cabbie and other hillarities

You might have noticed that it's been about a month since I last blogged. I know you've been sitting at home, stuffing your face full of frozen waffles, pining for my return. Well put down those waffles, I'm back and I come bearing food porn! I've had a busy month- full of getting ready for Las Vegas, talking about Las vegas, thinking about Las Vegas, and then travelling and visiting Las Vegas. So maybe you're lucky I stayed away, you just get to sit through the abridged version :). It was kind of the trip of a lifetime for me, but I'm the luckiest girl in the world and get to do it every year for my business convention. 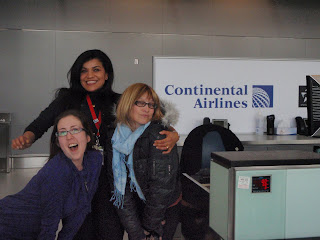 This year, my two best friends Kristi (who was featured most recently on my blog here) from California and Julie from here were coming with for a weekend away- party time (excellent) before my business stuff started. We flew out of Toronto, where a long wait ensured lots of stupid photo opportunities and of course food! 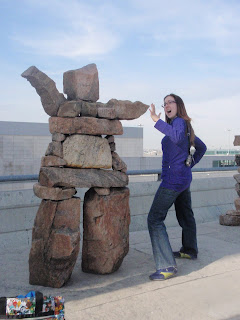 The Toronto airport departure area has a restaurant called the Molson brew pub. When I last flew out of here, I was one starvin marvin-and ended up having the most divine Veggie burger of my life. The first time I actually sent it back because I thought it was a meat burger. I didn't have the heart to double check if it was vegan, I just asked for no pesto and hoped for the best. When I travel, my usual rules tend to relax a bit due to necessity. No food on airplanes + questionable choices on arrival sometimes = take what you can get. When we arrived at the Palms in Vegas, Kristi had brought us spicy lentil wraps from Trader Joes in Cali-just what the doctor ordered after a long day of traveling YUM! (For the record, the Palms has very little to eat if you're of the veggie variety-so plan for that if you stay there. They did upgrade us to a suite, however, so this time it's forgiven).

A wild night of fun turned into a sushi brunch at RA the next day in the Fashion Show Mall. What a treat it was to get to share food with another vegan! It also happened to be the most beautiful day ever, so the Canadians insisted on dining outside. What does a vegan eat at a sushi restaurant? Well, when said vegan imbibed perhaps a little too hard the night prior-something greasy! Tempura! Julie and I have been known to embarrass ourselves when tempura is available in the "all you can eat" variety. Thankfully this wasn't a day to test our limits. 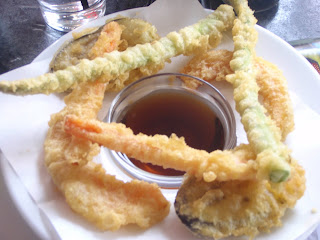 Next up, degaku tofu and veggie rolls. 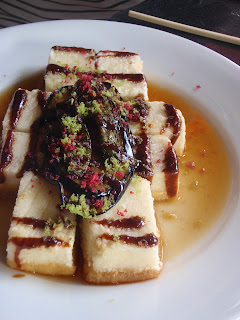 The veggie rolls had artichoke in them-which was a first for me and freakin awesome! Why hadn't I thought of that? Oh yeah, I am not a sushi master (yet). 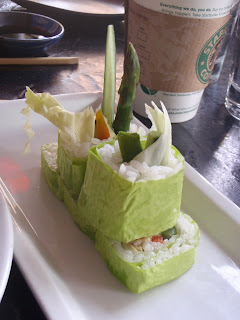 While we were eating, Elvis sat down at a bench across from us and started making what I presume to be a very long distance call. 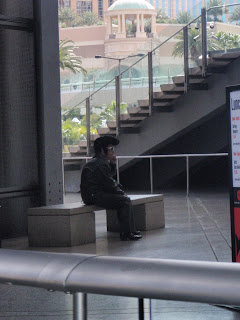 Awesome. After a fun day of sightseeing, a frightening experience at Circus Circus and a gigantic vile of cheap tequila slush-we were ready for our fancy dinner at the Wynn. On our way there, this happened: we got into our cab and told him our destination. Our lovely cabbie starts telling us all about how cool Steve Wynn was. I told him we were going there specifically because of the vegan menus, and he got insanely excited! "Wait, so you're vegan? No fish, eggs, dairy-nothing?" (From here I was expecting the typical thinly veiled insult, but no!) And he proceeds to ask the most thoughtful "I've been waiting 20 years to finally meet a vegan to ask all my questions to" kind of stuff. He then asks me "Have you heard of a vita-mix?" It was here that my heart exploded with joy. "It's only the thing I would run back into my burning house to save, " was my reply. He then holds up a 4 gallon glass mason jar full of vegetable puree. My kind of man! Vita-mix cabbie then excitedly took down this blog address, so if you're reading this-I still think of you fondly and wish you luck on your journey!
The Wynn is the only five diamond hotel in Las Vegas, and it looks and feels every bit of it. 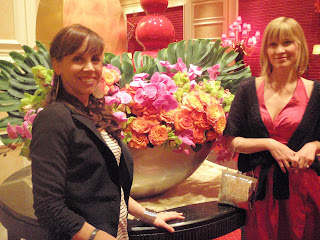 The owner and mega mogal went vegan this past year and each one of the Wynn's many restaurants has a separate vegan menu. After days of pouring over the menus, 6 different reservations and countless back and forths-we decided on Switch, which ironically enough is a steak house. As one would expect of the nicest hotel in Las Vegas, meals here are pricey. With a shared appetizer, a drink and a vegan main my total was a little over $60. I am a firm believer that you get what you pay for, and we had a meal and experience to rival all others. Firstly, we could arrive and feel like we belonged in this beauty, we have reservations! The service was top notch, and we had a personal sommelier at our disposal. Switch was designed to completely change every twenty or so minutes. As in the walls surrounding the restaurant either go up into the ceiling or go down into the floor, and come back completely changed . So it's either totally open to the hotel, or has rich tapestries, or has stone or other choices perhaps if we were there longer. It's hard to explain, but totally awesome. The ceiling also opens up to the most spectacular chandeliers. The only negative is that fancy restaurant=low light=suck pictures. And my camera is lame. See earlier post re:why I can't have nice things.
First up, carbs! Shaped like a W, cute. Our first round of bread came with cheese/bacon biscuits plus the W ones. I told the waiter that we were vegan and he said "so sorry, I'll get you some new ones that weren't touching the others." This dude gets me *swoon* and lets me save the annoying vegan requests for another time! 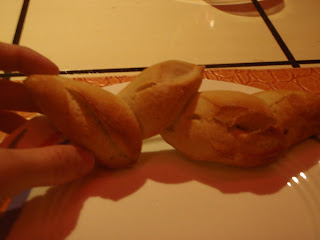 Next up, appetizers. This one was a hard call, but we went for the Tofu Compacho(?) It had a bunch of fancy greens, pine nuts, pesto and about 7 other reductions that would take a million years to make at home. It was epic. Truly amazing. 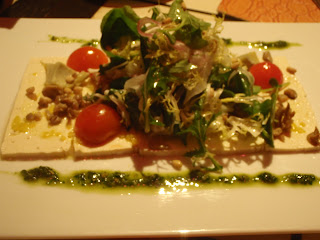 On the recommendation of our host, we both had the polenta with wild mushrooms and truffle oil. Now, I don't actually like polenta. I'm not sure if it's the texture, or the generally bland flavor-but I'm just not generally a fan. Our host, however, kissed his fingers like Italian's tend to do when they describe perfection, so I was easily convinced. 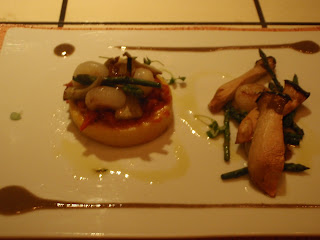 I did like it, but didn't weap with food happiness like I did with the appetizer. In lieu of desert, I had a lechee cocktail which I drank too fast to take a picture of *sorry*. After our amazing meal, we decide to walk it off and explore our magnificent surroundings. There were crystal peacocks! Designer stores! A red carpet with T Pain! We did a lot of window shopping, but the magnificent 20+ carat yellow diamonds in the Cartier window drew us in. Since most of the people in there were giant guards, the girl was more than happy to let us try on to our heart's content. She put her favorite watch on me, which was a $42,500 white gold and diamond piece *squeal*. I'm pretty sure it went perfectly with my outfit. 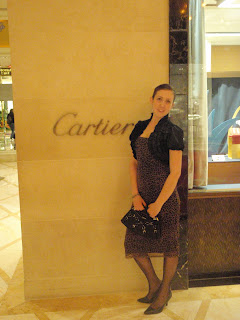 I won't carry on about how awesome this evening went on, but I could. We left there vowing to return for our entire stay next year.
Fast forward to the next morning. Oh, my head. Errr, my stomach. Determined not to waste a beautiful day and endless dining opportunities, we fuelled up on expresso coffee beans covered in dark chocolate and trucked on. 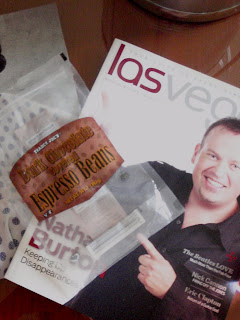 Since getting around Vegas gets expensive, we decided to see where our feet would take us. The answer was the same as almost every time Julie and I are together-Chinatown. 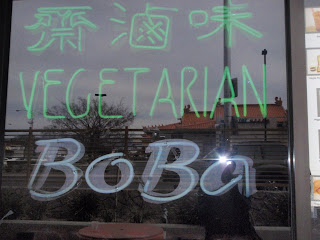 Much to my delight, there was a vegetarian restaurant right in our path! It was called Veggie delight, and it featured a wide selection of bubble tea and faux meat Asian dishes. Over the years, my tastes have evolved away from things that taste like meat-but look at the selection-I had to give it a go. 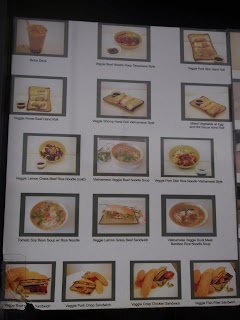 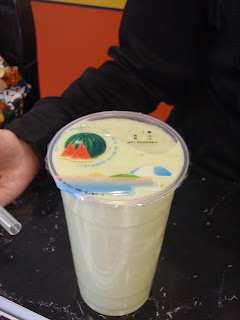 Next up, I had the fresh rolls with fried "pork strips". 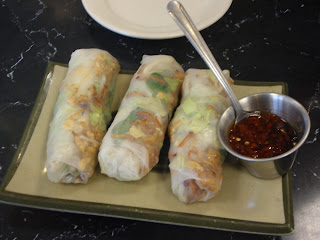 For my main dish, I gave the lemongrass "beef" a go. 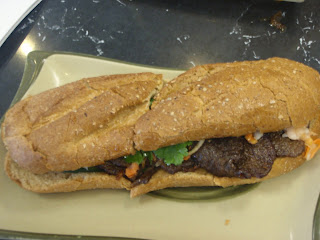 I can't in all honesty say that it lived up to my inflated expectations. To be fair, I was in the "everything taste like ash" kind of stage-so it absolutely could have been me. But if you have the chance, check it out and let me know what you thought.The silver lining was that while browsing through a local magazine, I saw a write up for the restaurant I was currently eating in as well as a vegan donut shop! And it was on the street we were on! You bet your ass we were going there. I have to warn those with only a mild adventurous spirit that if you're walking, this neighborhood gives you a real picture of how the other parts of Vegas live. We got some drive by hoots (ok, lots of them) and some dude tried to proposition us. When we finally arrived at Ronald's donuts, I was expecting the same eclectic hipster vibe you often get at places that cater to our people. Not so. If you were to walk into a donut shop from 1984, this would be it-signage and all. It is not publicized anywhere which donuts were vegan, or that there were vegan donuts anywhere in the vicinity actually. Upon asking, however, we discovered a plethora-and all under $1. Steal! Cream filled, chocolate covered-yum! Definitely worth the walk, and who knows what kind of colourful characters you might meet on the way.
My Vegas journey continued on for 4 more days after my two best gals went home to their jobs and families. It was full of culinary hits and misses that one comes to expect at a conference at the Hilton. I will say though that being vegan on the road always brings an element of adventure and surprise I have never experienced before. Viva Las Vegas!
Posted by Of.Varied.Interests at 3:58 PM

Of.Varied.Interests
Big dreams, loud laugh, passionate, curious. I wear a million hats. Which one shall I choose today?